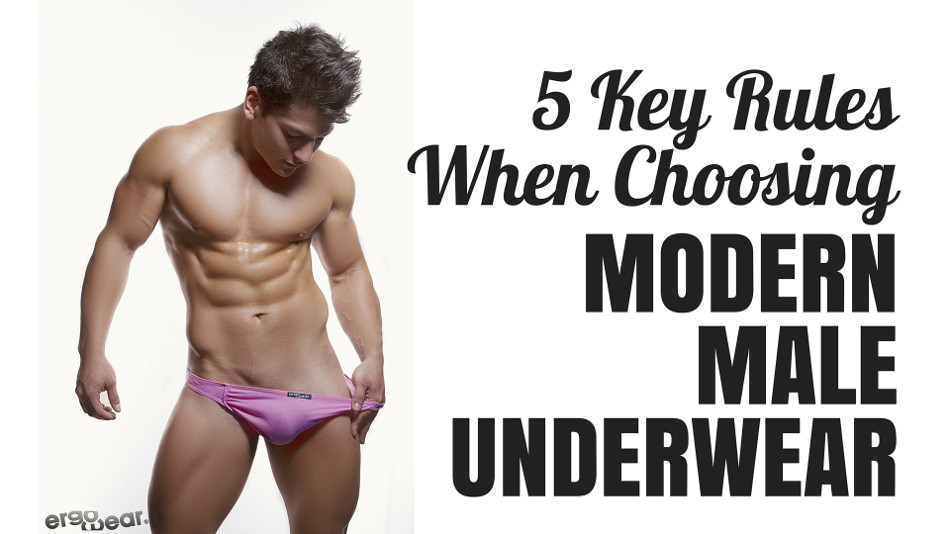 While underwear for males hardly gets the consuming attention its female counterpart receives, men and women are taking a closer look to modern male underwear.

Men’s underwear is certainly getting a lot of
attention these days, partly because men have become more fashion and health conscious about what they wear even under their clothes.

Underwear designers recognize that it’s not just women who care about their panties and their delicate parts. Men do too, and they are looking for
boxers, briefs and  thongs that look good for anyone who sees it.

And if you think you’ve had enough of traditional underwear, welcome to the
sophisticated and ever growing world of men’s  pouch boxer briefs, as well as male thongs, bikinis & jocks.

For men who are not quite sure what to look for when shopping for underwear, here are the five key rules when buying modern male underwear.

1. Underwear Must Keep Up with Physical Activity

If you’re the active type then it’s important to have underwear that moves as you do. When your days involve a lot of walking or going from one physical activity to the next, the last thing you want is boxer briefs that bunch or ride up into your crotch.

It’s no picnic to have to constantly adjust your underwear and trying in vain to discreetly remove it from your butt crease. The underwear should be
versatile in its design to move effortlessly as you move, whether it’s a regular day of moving about in the office or working out at the gym.

2. Underwear Must Not Chafe

Not everything you do fits within a schedule. Occasionally, you may decide to spend some unexpected free time doing a midday workout at the gym or teeing off a few rounds with a client on the golf course.

However, if your underwear has bothersome seams and a rather awkward cut, then unfortunately, you’re at risk of getting chaffed.

No man wants to endure the cringing pain of dealing with a sore groin or having to smother their private parts with anti-chaffing cream. Therefore, pouch underwear must be
properly cut and sewn so that the seams give absolutely no discomfort to the wearer. It should be comfortable wear for any impromptu activity.

Most males probably care more about the health of their balls than any other part of the body. That being said, the type of underwear you choose plays a very important role in how “healthy” your testicles really are.

Wearing the wrong underwear can suffocate the testicles and build up heat in your groin area. This, of course, is not good news for a healthy love life and the health of the sperm.

Healthy underwear should firmly support the testicles but should not be tight or uncomfortable. They should allow the testicles to breathe, especially if you are prone to sweat in the groin area. To this end, men’s mesh underwear is our pick.

4. Underwear Must Be Affordable

Have you ever come across the perfect underwear only to be scared away by the price tag? They both look the same, so why should you have to pay extra to wear a brand name?

Even though it may match all the criteria for fit and comfort, it’s really hard to convince oneself that the $50 designer label is giving you more value for money than the
$15 underwear.

For most men, it’s important that underwear fits not only our package but our budget as well. Being able to wear good quality underwear shouldn’t cost an arm and a leg.

Sure, prices will vary according to style, quality, comfort and a range of other factors. But the price point should also make you feel comfortable with the purchase and even consider buying multiple pairs.

5. Underwear Must Enhance Your Physique

What good is all the work you put into grooming a hot body if the underwear lacks that wow factor when you drop your pants.

Not only should your underwear fit well, it should also be pleasing to the eye of the beholder. This means that sweat stains should not be visible on your crotch. Neither should the underwear fit awkwardly on your body.

Bonus points, however, if it makes the package look bigger! Men want to feel confident knowing that their anatomy is impressive and is definitely getting the desired reaction from whoever gets the privilege to see it.

One of the newest men’s underwear that is impressive both in appearance and design is the contour pouch. This non-traditional underwear boasts a new shape in the front to comfortably support the man’s penis while comfortably lifting the package.

The contour pouch underwear is designed with a center seam that provides ample space and support for the male parts while gracefully lifting them for firm support.

The men underwear bulge is created by joining two ends of fabric and closing the slit at the front of the underwear that most males never bothered to use anyway.

This results in a center seam that is connected to the base of the crotch, supporting the male parts in an enhancing and anatomically correct manner. The MAX and
X3D styles are manufactured this way, providing more than enough room and depth.

Other styles of non-traditional male underwear include the
Feel line, manufactured in a highly elastic and seamless pouch, able to create a modern, profiled and supportive look. Get to know the rest of our pouch boxers and briefs.

With the contour pouch underwear, the man enjoys maximum comfort in his private area. The simple design of the center seam with the elastic waistband makes the underwear visually appealing to men of all ages.

Of course, it doesn’t hurt that by hoisting the male anatomy, the pouch underwear definitely makes it more visually appealing.

Finally, we know that finding well designed, high quality, comfortable and sexy underwear can be a tedious task. That’s why having a set of criteria of what works for you and what doesn’t definitely helps the process.

When your undies feel good, you feel good and you can go about your day with confidence knowing that discomfort in your nether regions isn’t one of the issues you have to worry about.

Thankfully, the market now has a wide range of options from which to choose to help you find the perfect
men’s pouch underwear. 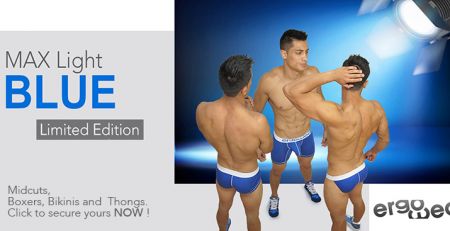 Another addition to the MAX Light family. This time is the turn of an electric blue limited edition of Thong,... read more 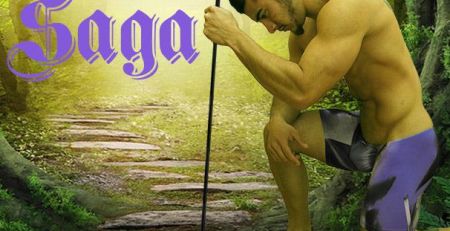 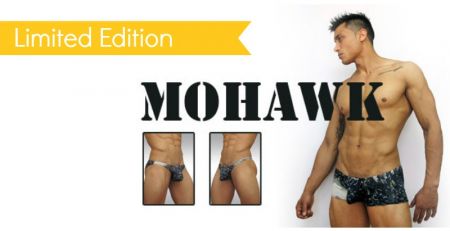 For all you wild souls and spirits out there, we're bringing you this time a uniquely printed Limited edition... read more 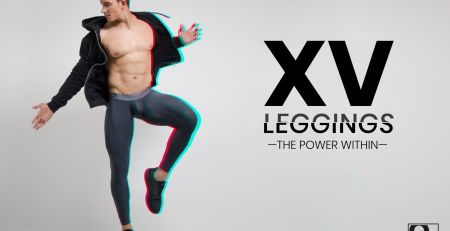 New XV Leggings: Winter long johns and sports tights, all in one!

Whether you're looking for long underwear as a first layer or for sports leggings that are not cut in... read more 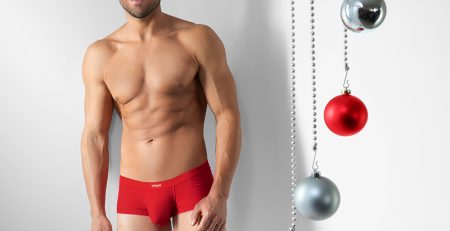 Enjoy the Ho Ho Holidays in Comfort & Style With Ergowear

As a man who appreciates the important things in life, a lot of the marketing effort around holidays can... read more

A shameful list. Celebrating our 2,000 verified reviews achievement, we decided to list the top 10 reasons why every man... read more 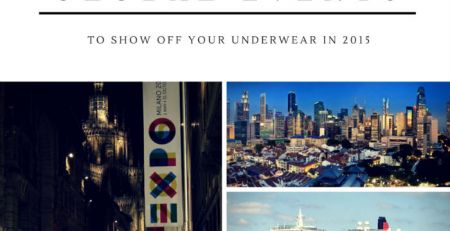 Global Events To Show Off Your Underwear in 2015 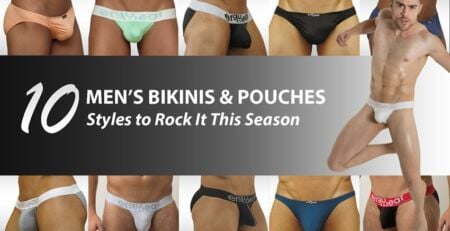 Men’s Bikinis & Pouches + 10 Styles to Rock It This Season

When it comes to picking a particular men's bikini, choosing a style can seem a daunting task. Even more, if... read more

With the Oscars around the corner, we dug up some Oscar-related stories that could've inspired new trends in pouch underwear.... read more 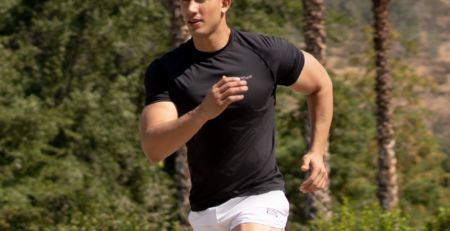 The History of Men’s Activewear Shorts

Activewear shorts aren't all that new. But with built in pouch underwear? Now that's new. Learn about the perks... read more

We use cookies on our site to enhance your experience by remembering your preferences and repeat visits. By clicking “ACCEPT”, you consent to the use of all cookies. Select "SETTINGS" to provide controlled consent.
SETTINGSACCEPT
Manage consent

This website uses cookies to improve your experience while you navigate through the website. Out of these, the cookies that are categorized as necessary are stored on your browser as they are essential for the working of basic functionalities of the website. We also use third-party cookies that help us analyze and understand how you use this website. These cookies will be stored in your browser only with your consent. You also have the option to opt-out of these cookies. But opting out of some of these cookies may affect your browsing experience.
Necessary Always Enabled
Necessary cookies are absolutely essential for the website to function properly. These cookies ensure basic functionalities and security features of the website, anonymously.
Functional
Functional cookies help to perform certain functionalities like sharing the content of the website on social media platforms, collect feedbacks, and other third-party features.
Performance
Performance cookies are used to understand and analyze the key performance indexes of the website which helps in delivering a better user experience for the visitors.
Analytics
Analytical cookies are used to understand how visitors interact with the website. These cookies help provide information on metrics the number of visitors, bounce rate, traffic source, etc.
Advertisement
Advertisement cookies are used to provide visitors with relevant ads and marketing campaigns. These cookies track visitors across websites and collect information to provide customized ads.
Others
Other uncategorized cookies are those that are being analyzed and have not been classified into a category as yet.
SAVE & ACCEPT