THE OFFICIAL ERGOWEAR STORE - SINCE 2002

FREE WORLDWIDE SHIPPING OVER US $80 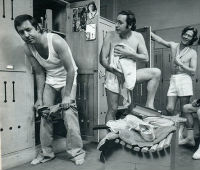 Following the most recent underwear market report, we could’t feel more excited about the global outlook. But although things are looking very positive for the advanced market, pouch underwear included, many men are still wearing traditional boxer briefs. So we bring you five steps to stop wearing tighty-whities, for once. 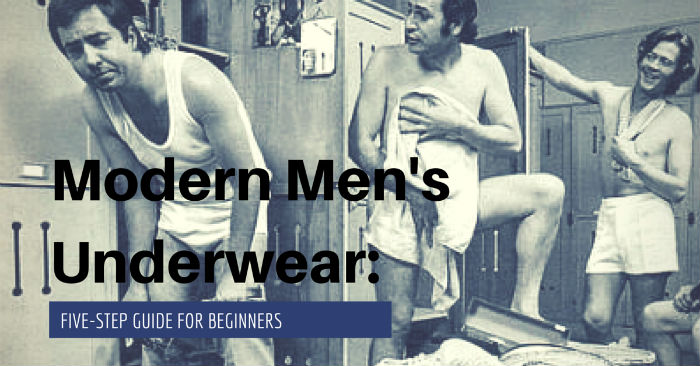 Things are looking positive for almost any player in the
male underwear industry. As a company that has been on this market for over 10 years, we definitely feel now is one of the best times to buy new underwear.

As males abandon
loose underwear in favor of slimmer and more secure undies. The big players are now starting to realize the shift in male underwear market.

While making the market more competitive in the turn. We will keep our approach of delivering best-in-class
products. Along with an outstanding customer service experience.

And we bring this up, because we are noticing a change in male underwear
shopping habits. Two trends are happening. First, males are doing their own shopping. Second, males are experimenting with new styles.

The first trend is explained with the growth and explosion of the Internet and ecommerce. And it has been growing steadily for some time. Thus, we would like to help you jump in into the second trend. Helping males to finally try some modern underwear styles. So we bring you this
five step guide to try modern men’s underwear styles.

Step 1. Think Of Those Around You 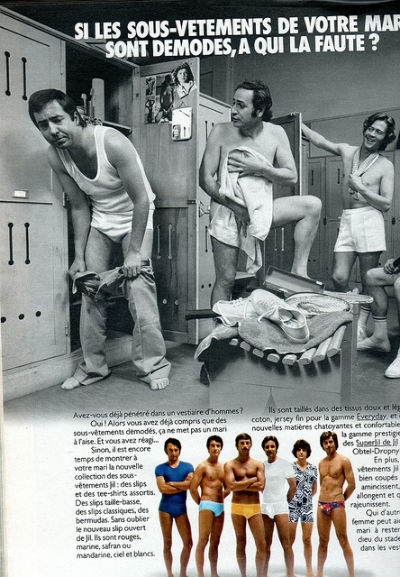 Anything that you do in life has an impact in
those around you. And this not only includes your ideas or crafts, but also your garments.

While in most cases you won’t be showing your underwear on a regular basis. Specially if you are single. Sometimes you will. And even more if you’re married or living with someone.

By realizing this, it becomes
important to pick an underwear style that can arouse and attract your partner. While in turn, bringing utmost comfort as well as style to the bearer. Unlike traditional boxer briefs, modern underwear styles can achieve that.

We are not encouraging people to stop wearing whity… actually, we are. Yes! We are encouraging males to jump into the
sophisticated male underwear wagon. As the recent global underwear market report mentions, “demographic changes and lifestyle shifts contribute to some variation in (underwear sale) trends”.

Why are you still wearing them anyway? All the negative comments that you hear about
fitted pouch underwear, is not because of fit, fabric or style. Its usually because most males don’t dare to cross that blurring line. Which, by the way, is fading with progress.

It’s usually because men don’t want their sexuality to feel threatened. So they stick to their
traditional ways. They are stuck in a model, in a male fashion model that’s outdated and passé. For a lack of a better word.

Step 2. Move Out of Your Comfort Zone 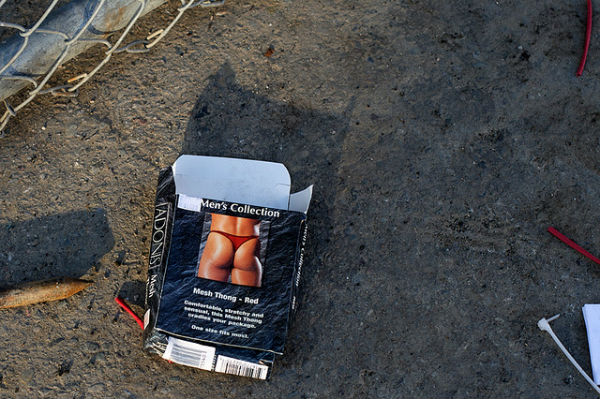 I am not saying that
you need to buy Ergowear, you could try anything else. But of course, with so many brands, it can be hard to pick something to begin experimenting.

But you have to do some
research. Maybe try researching the company ratings or how long have they been in business. The actual product reviews could give you a better idea of what to expect.

While it can be hard to start wearing colorful and fancy underwear styles. You can start your journey by wearing something unusual. Try for example a
colorful boxer brief, or pouch underwear in neutral colors.

In our case, you can tell we are not a company that
emphasizes color, or that over-sexes underwear as many other brands out there. We just focus on fit and comfort. And it’s not that we don’t care about the rainbow specter, it’s because we want to focus on creating the best products for every male.

Often, we bring color to our best-selling collections. But we believe gray, white and black are the colors that should and will appeal to 99% of males, at any time.

These neutral styles not only feel good, but look good from any perspective. And we won’t change that pattern. We want to keep producing
the best undergarments in the world.

That’s why we don’t dare to use
colorful, yet
uncomfortable fabrics and patterns that dye all your other clothes.

We are 100% focused in bringing the best manufacturing practices. The best
materials and the best cuts that will give you a lasting day-to-day performance.

Step 3. Be Fully Invested On It 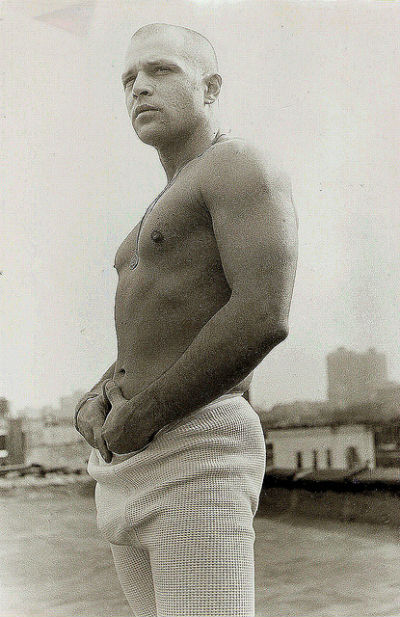 Understand that the benefits of finding
the right underwear, far outweigh the challenges often associated when shopping sophisticated underwear.

Although you can do your research based on a price range. It’s
not the best idea to begin with. Underwear is a garment that must survive your daily routine. Obviously, it can be hard to be away in a new pair of underwear all day, but it’s worth the risk to find a good pair of underwear.

You can’t put a label of
expensive when you have the most comfortable materials and styles. With the benefits of well-crafted underwear. That also generate a great well-being. That my friend, is just priceless.

Quality underwear
lasts longer than traditional underwear, when following proper care instructions. And with our smart pricing options, we think our prices should not be a concern. As it’s noted recently.

I’ll say that again.
Ergowear is not expensive. When you consider the short life span of some low-quality and lower-priced underwear styles.

I encourage every male to invest in
quality underwear. And by the way, I am not sure about how often do you change underwear, but I suggest you change them on a regular basis!

Step 4. Choose Based On Your Lifestyle 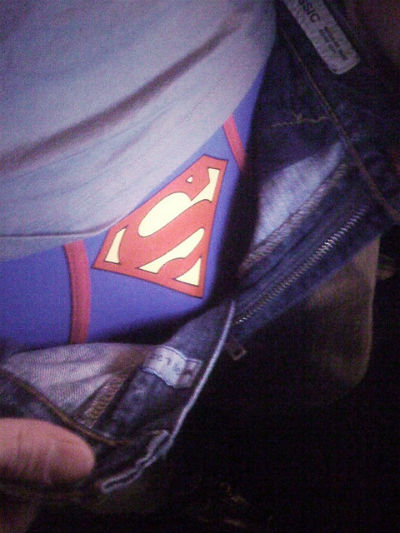 Sometimes you want to use
underwear for specific situations. We have already written about that. And we have also made specific pages to that end. So you might want to check those by following this link.

But, we also manufacture underwear that is good for just about
every situation. If you want to be on the edge, before going too much into the specifics of sophisticated underwear, I suggest you start with the Mesh line. Whether it’s the mini boxer or bikini. You can’t go wrong with them.

This style is
ideal for any situation. Under a formal suit, when going to a formal dinner, with jeans, or with gym pants. Even for those practicing bicycle or similar intense sports.

The Mesh style will give you a good understanding of what do we mean with
utmost comfort. And you’ll start to see all the benefits that you can get from quality underwear.

Ideally, you want to base your decision in leg length, material, pouch depth and shape and having a waistband or not. Consider all of this factors when selecting a style over another. For a deeper understanding read this
style guide. 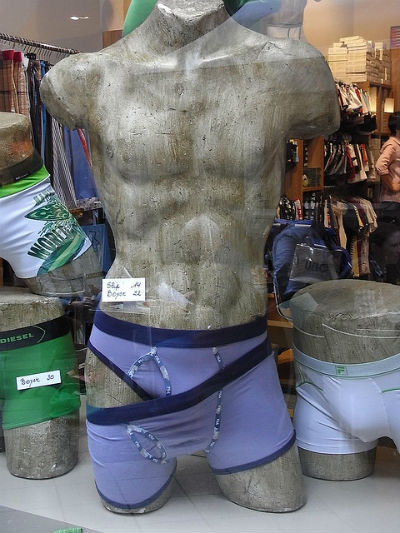 We encourage
experimentation because we are pretty sure there is no going back as far as all-day comfort. Once you start wearing this type of underwear on a regular basis.

As Jack Canfield said,
“everything that you want is on the other side of fear”. So, don’t be afraid. You can’t even imagine the benefits of wearing this type of underwear. From fit, to texture, mood and support. Your day will feel better, because you will feel better.

In any case, we encourage every male to at least buy a decent pair of underwear on a regular basis.

But, just in case there are some doubts before buying your first pouch underwear. I’ll give you a tip.
Don’t start with just one style. Because maybe this is your first time buying this type of underwear, chances are you won’t make the best decision.

It’s understandable that you may make some mistakes when choosing what to buy. So try to pick
two to three different styles. From the long to the short one’s, and also try with different pouches. So that you can understand their differences. And again, don’t be afraid to experiment. We all make mistakes, more so when choosing underwear.

As an underwear executive recently comments: ”
underwear is designed to maximize fit, comfort and performance“. So I encourage you to try any modern style, and if not ours, theirs.

Also, don’t stick to older shopping practices. Think that
everything in life is an adventure, and we have to think of it that way, or we are going to be victims.

Just realize this and try to embrace the feeling on your day to day. Who knows what could happen. Worst case scenario, you are just going to
own a decent pair of underwear along with your tighty-whities drawer. Now you know it, are you going to keep lame, or are you becoming brave!? 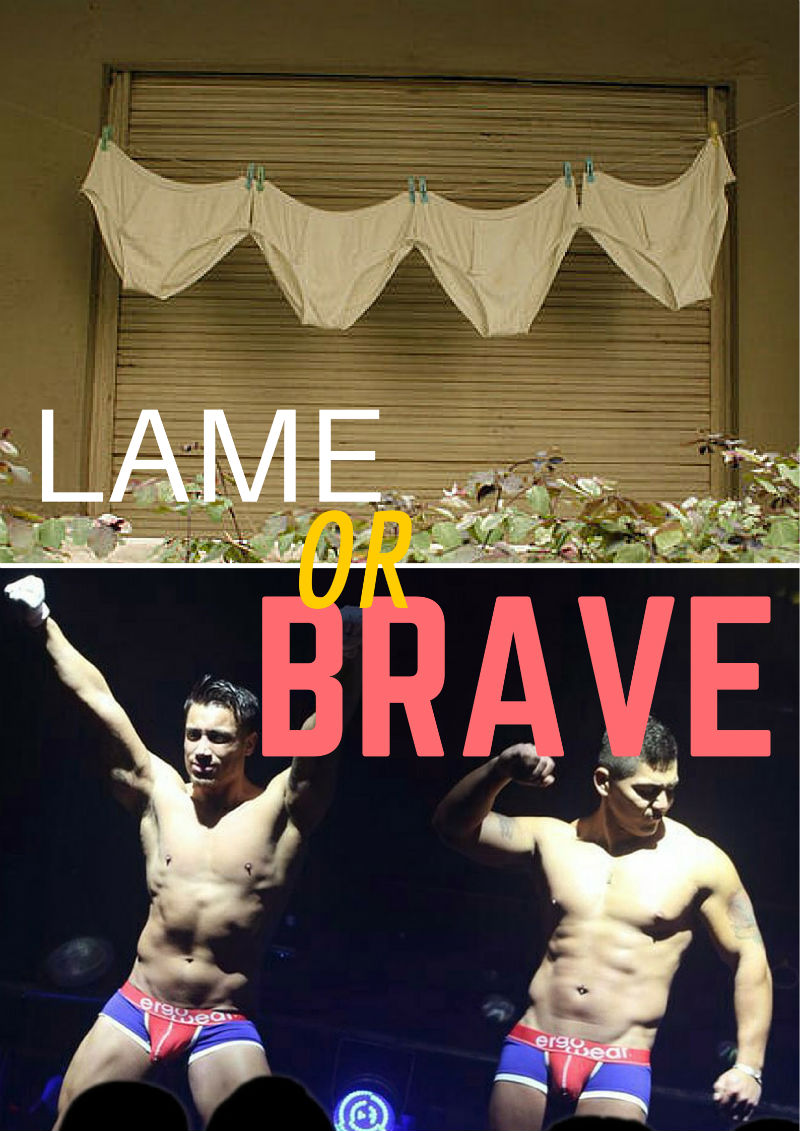 Subscribe to our newsletter and be notified of special sales!

All photos used under creative commons. 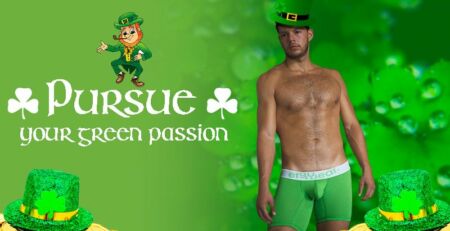 Indulge Your Passion in Green Style

Do you know what the color of the year is? Do you know there even is a color of... read more 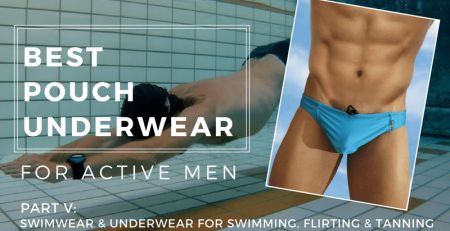 If you’ve ever doubted the significance of choosing the right type of underwear, just ask anyone who’s ever had... read more 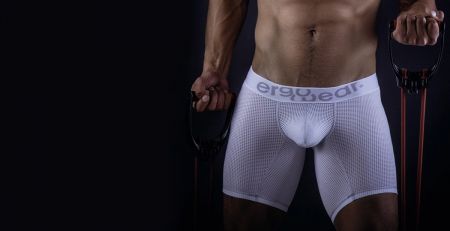 A powerful earthquake hit the central region of Chile yesterday evening. However, we are happy to inform that Ergowear's... read more

Dare to Try These Fantastically Daring Men’s Pouch Underwear Styles in 2017! If your new year’s resolution is to be... read more 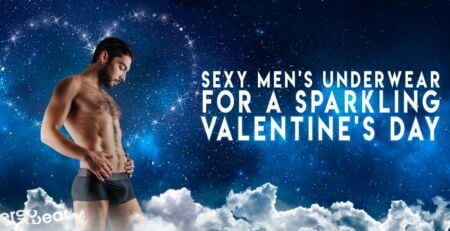 Wherever you go. Whatever you do. Whether you are close or far apart. Give your partner one of these... read more 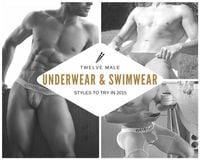 12 Male Underwear and Swimwear Styles to Try in 2015

We have decided to create a list of some products that we think deserve a space in your drawer.... read more 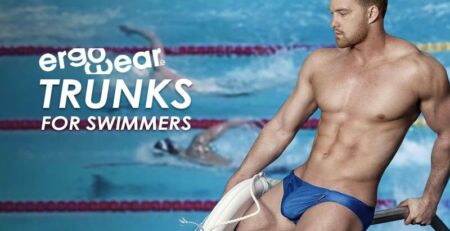 With 2017 already steaming with heat, it's a good time to look at your yearly fitness goals and plan... read more 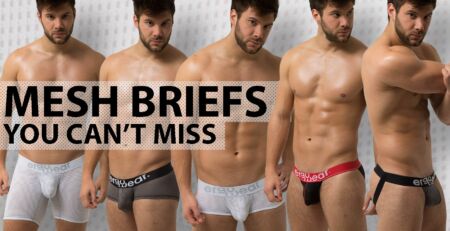 We use cookies on our site to enhance your experience by remembering your preferences and repeat visits. By clicking “ACCEPT”, you consent to the use of all cookies. Select "SETTINGS" to provide controlled consent.
SETTINGSACCEPT
Manage consent

This website uses cookies to improve your experience while you navigate through the website. Out of these, the cookies that are categorized as necessary are stored on your browser as they are essential for the working of basic functionalities of the website. We also use third-party cookies that help us analyze and understand how you use this website. These cookies will be stored in your browser only with your consent. You also have the option to opt-out of these cookies. But opting out of some of these cookies may affect your browsing experience.
Necessary Always Enabled
Necessary cookies are absolutely essential for the website to function properly. These cookies ensure basic functionalities and security features of the website, anonymously.
Functional
Functional cookies help to perform certain functionalities like sharing the content of the website on social media platforms, collect feedbacks, and other third-party features.
Performance
Performance cookies are used to understand and analyze the key performance indexes of the website which helps in delivering a better user experience for the visitors.
Analytics
Analytical cookies are used to understand how visitors interact with the website. These cookies help provide information on metrics the number of visitors, bounce rate, traffic source, etc.
Advertisement
Advertisement cookies are used to provide visitors with relevant ads and marketing campaigns. These cookies track visitors across websites and collect information to provide customized ads.
Others
Other uncategorized cookies are those that are being analyzed and have not been classified into a category as yet.
SAVE & ACCEPT